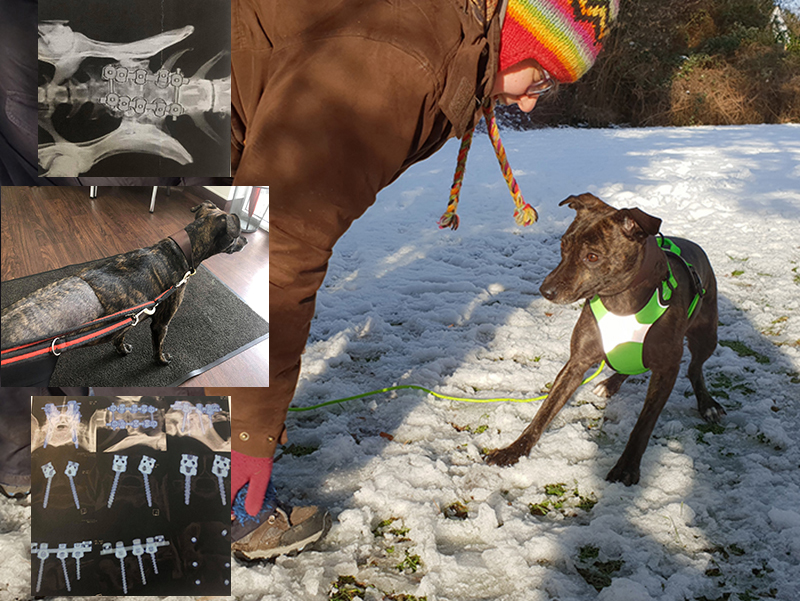 Bobs turned four in December 2019. She used to love to run and play with other dogs. Chasing balls was always a firm favourite. I always knew she was smart and needed to use her brain so we also did scentwork. I had dabbled in tracking, hoopers and even fly ball with her. Friends from scentwork told me about pettrailing. Once we’d tried it, we were both hooked!

From about the age of two Bobs has shown some sort of lameness on her back legs. She was seen by her vet who X-rayed her and saw little wrong. The only slight indication was a slight elevation in a reading from her kneecap fluid. So from that she was referred to the specialist orthopaedic vets.

Meanwhile I was having to limit her exercise and restrict the activities she could do. Scentwork and trailing seemed the obvious things to keep going because they worked her brain, tired her out and I could control her on a line to prevent her doing anything silly. She was seen by the specialist, had lots of tests and scans following which they realised it was a spine issue which was potentially exacerbated by a slightly deformed pelvic area.

This diagnosis led to lots of experiments with painkillers including spinal steroid injections together with incredibly restricted exercise. Whilst she was seeing the specialist, I asked Bex for a video of Bobs trailing to show to them. This was used to find out Bobs could continue trailing during her treatment.

With the guidance of Bobs specialist vet, Bex our trainer used her skills to tailor Bobs training to give her the maximum mental workout within the boundaries of her restricted exercise regime. We managed to keep Bobs trailing until shortly before major surgery to stabilise her spine.  Surgery was the only way forward as her steroid injections were not working.

After months of physio, hydro, rest and recuperation to ensure the operation was a success, we finally had the go ahead from the specialist to start trailing again. Bex has always been very careful to adapt the trails to meet Bobs needs. Our first trail back a few months after the op, Bobs took to it like a duck to water. It was me that was a bit ropey!!

You would never have guessed she had been away and this is due to the wonderful way that she and I have been taught the foundation skills of trailing with PetTrailer UK. I would highly recommend these guys to work with any dog who is on restricted exercise if their vets and specialists are in agreement. Alexia 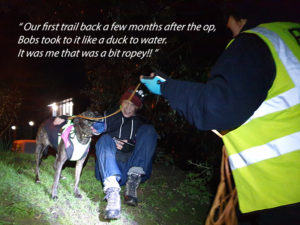 Next Event starts in…

We use cookies to ensure that we give you the best experience on our website. If you continue to use this site we will assume that you are happy with it.OkPrivacy policy